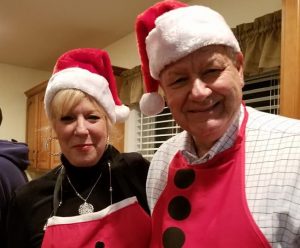 Homeowners at the Summerfields West 55+ community in Williamstown rang in the New Year in a way that embodied the essence of what this rapidly selling neighborhood stands for; namely, an affordable, fulfilling and active lifestyle enhanced by a warm community spirit that distinguishes Summerfields West as the community of choice in South Jersey. Highlighted by the presence of many new residents, the Holiday Party offered, both literally and figuratively, a “taste” of what lies ahead as 2018 begins to unfold. With an abundance of food and drink, as well as lively conversation, the Holiday Party at Summerfields West consummated another phenomenal year in terms of home sales, customer visits, and community growth.

Most of the attendees were as overjoyed about being members of the community as they were about their hopes and dreams for the New Year eventful calendar of engaging onsite activities, great escapes and more lie ahead.

“Aside from our beautiful home, we have always noticed the close-knit nature of the community’s residents when we visited before we purchased at Summerfields West,” stated Carol Laughlin, formerly of Pitman, NJ.

“We realized there was always something very special about this place, something more than the wonderful home styles and the perfect location that allows our children to visit so often,” added Tom Weissman, another South Jersey native.

Carol Boswell, formerly of Cherry Hill, joined the chorus of accolades. “Since I moved in over a year ago, I feel better than ever about the decision I made to purchase at Summerfields West.”

The year 2017 proved nothing short of a spectacular sales success at Summerfields West, as evidenced by the opening of a new section of homesites welcoming even more homebuyers. Not surprisingly, the strong sales at Summerfields West have closely mirrored the pace of growth in the overall American housing market, with new housing starts nationwide up 3.3 percent to its highest level in two years, according to a December 2017 Commerce Department report; and single-family housing starts at their loftiest perch since 2007. Further, the strong performance of the stock market lifted by solid economic growth, federal tax reductions, and powerful consumer confidence suggest continued robust sales at Summerfields West in the year ahead.

As an enormous Baby Boom Generation continues to retire and opt for single-level homes without stairs and no more lawn mowing chores, today may be the ideal time for active adults to consider visiting Summerfields West, touring the five distinctive model homes and talking to current residents.

Summerfields West is a Temple Companies Lifestyle community, developed in an over 50-year tradition of family ownership and operation that puts the homeowner first. Summerfields West is located in the heart of the New Jersey Pinelands, but easily accessible to all lifestyle necessities, as well as entertainment venues, golf, shopping, dining and healthcare facilities.