Right in Your our Backyard.

Enjoy something Grand and Theatrical in Williamstown, New Jersey.

No singing. No dancing. No Acting. And, no Applause. Eighty-six years of silence, since 1976 the Grand Theater, home of The Road Company became silent when in 2010 the roof collapsed ending the theater’s activity. Theatergoers lost an entire venue throughout the Delaware Valley and in particular, Southern New Jersey. The damages required some $250,000 to tackle.

Facing the daunting reconstruction cost the Road Company supporters established the “Make It Grand Again Campaign” fund. As news of rebuilding the historic theater spread through the South Jersey theater community, many came forward to help. Built in 1924, The Grand Theater in Williamstown, New Jersey, has been the site of vaudeville shows, silent movies, feature films, and the home of The Road Company. Until the late eighties the company was owned and operated by the Lanzalotti family. 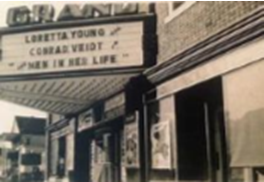 The Grand Theatre holds a rich history in Williamstown. Built in 1924, it has been the site of many vaudeville shows, silent movies, feature films, and the home of The Road Company. In 1968 Oscar and Violet Benedetti purchased the Grand from her sister, Eleanor and Charles Lanzalotti. The Benedetti family lived above the theater and operated an Ice Cream Shop in one of the storefronts. In the late eighties, once again, the theater was sold. Julie Speeney, founder of The Road Company, walked into the Grand Theater and fell in love. And became the location her theater group founded in 1976. The dedication was to provide quality family entertainment to the residents of Monroe Township and surrounding areas. The theater offered a cozy, intimate atmosphere. Old movie posters showing silent film stars hung on the walls, the concession area walls, and ceiling were made of patterned tin, and the walls in the theater proper were cloth.

There are few comparable structures in existence today – and they are very difficult to maintain. These historic theaters add to a picturesque downtown area. Williamstown was so fortunate to have The Grand. This was built in the age when live theater was one of the few entertainments available to the population at large. Ms. Speeney had discovered the perfect place in which to bring that same live entertainment back to the people of the town. Living well is “performance.” And at Summerfield’s West 55+ in Williamstown, New Jersey, beautiful manufactured homes that can be customized to suit your needs. Summerfields’ homes are constructed and assembled in controlled conditions, a process that maximizes the productivity and quality. Come and enjoy a front row seat to experience a new and exciting lifestyle for yourself, and right now  you have an amazing opportunity to purchase this superb home: 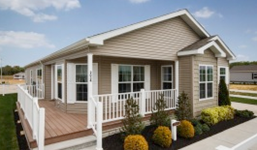 This home is available for custom order. Please visit Summerfields West to tour the Model Homes or call Anne Marie Burgo at (856) 629-2011.