Let’s begin with the obvious; winter is the coldest season of the year. In some regions, winter isn’t just cold, it delivers snow. The highest snowfall ever recorded in a one-year period was 1,224 inches on Mount Rainier in Washington State. Snow comes in a variety of crystal shapes. Scientists use a photomicroscope to catalog shapes of snowflakes. The average snowflake is smaller than a penny.

The equinoxes and solstices don’t always merge on the same day because the earth doesn’t circle the sun in exactly 365 days, but surprisingly to most is that its orbit has very little impact over the seasons. Actually, it’s the tilt of earth’s rotational axis, around 23.4 degrees that creates seasons. Who knew? 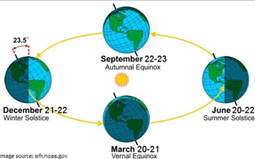 The direction of earth’s tilt does not change while orbiting the sun.

What changes as the earth orbits around the sun is the position of the hemispheres – the northern hemisphere creates winter when it faces away from the sun during winter. The southern hemisphere tilts towards the sun producing summer. Now you have a bit of knowledge on the changing seasons. So, there you have it; you now know why you’re hot in summer and cold in winter.

Just as the earth has as steady orbit, so does Summerfields West 55+ Community. It remains a stable neighborhood that rotates around quality, detail, and sensitivity to homeowners and practical values. The earth’s orbit has brought us to the end of this year. That said, there is nothing more valuable that a healthy and prosperous life and that is what we wish for you.