We wish our residents and their families and friends a Happy Thanksgiving. 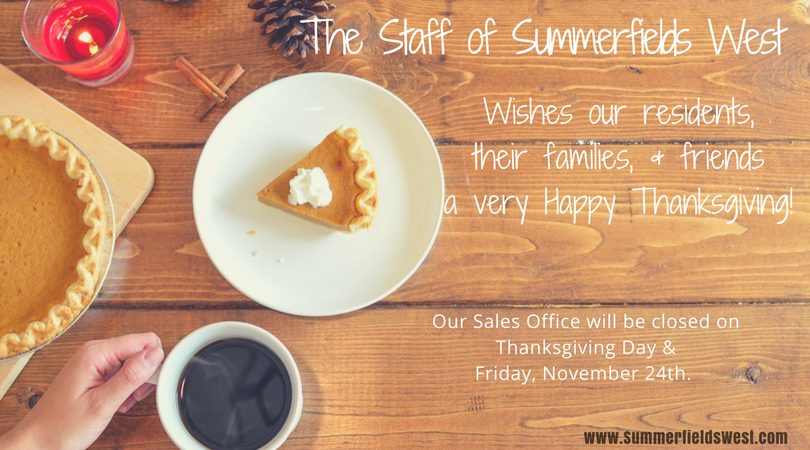 Ever wonder where things got their start? For instance how did Summerfields West come into reality? It came to be through a dream pursued by The Temple Companies. With Thanksgiving around the corner we could ask the same question: How did the “Turkey Meal” at Thanksgiving come into being?

At the center of the Thanksgiving Meal

Turkey is the undisputed centerpiece of Thanksgiving! In fact the majority of dishes in the traditional American version of Thanksgiving dinner are created from foods that are native to the “New World.” The Pilgrims learned about and received these foods from the Native Americans

“The First Thanksgiving,” as it has traditionally become known, started at the 1621 feast. Attended by Pilgrims and the Wampanoag at Plymouth Colony the “fixins” included, venison, clams, waterfowl, fish, fruits and berries and squash. William Bradford, an English Separatist moved to Holland to escape persecution from King James 1 of England and served as Governor of the Plymouth Colony.

His journal noted that, “besides waterfowl, there was great store of wild turkeys, of which they took many.” Many of the foods that were included in the first feast (except, notably, the seafood) have since gone on to become staples of Thanksgiving dinner.

Actually the inclusion of the turkey on Thanksgiving precedes Lincoln’s nationalization of the holiday itself in 1863. Alexander Hamilton actually proclaimed that no “Citizen of the United States should refrain from turkey on Thanksgiving Day.” Benjamin Franklin also held regard for the wild turkey as an American icon. Interesting to note that turkey was uncommon as Thanksgiving fare until after 1800. By 1857, turkey had become part of the traditional dinner in New England.
The White House Cook Book, 1887, by Mrs. F.L. Gillette, et al., had the following menu:

Don’t read into that. Thanksgiving turkey consumption is so ingrained in U.S. culture that every year since 1947, the National Turkey Federation has presented a live turkey to the President prior to each Thanksgiving.

So, what placed the turkey on the table?

Well, the journal (noted above) of William Bradford tells us, “a great store of wild turkeys, of which they took many…”

Summerfields West, what better place to enjoy a friendly and peaceful Thanksgiving Day. Happy Thanksgiving to all.